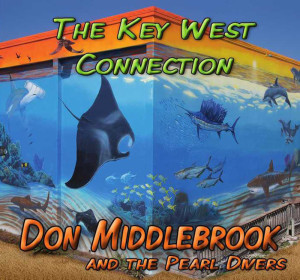 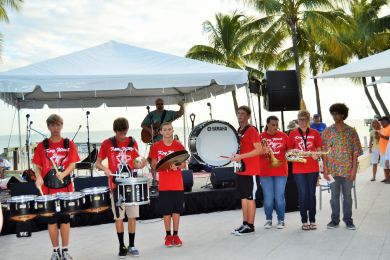 "To all the Super Cool Kids who supported this Music Project, I salute you!"

~~Wyland, Artist of the Sea

The Key West High School Band Drum Corp marched in, with students and faculty members, to the Casa Marina in Key West, FL on October 29th to receive a check for $1,500.00 from Don Middlebrook and The Pearl Divers!! The money was raised as a result of the album, “The Key West Connection,” that features the KWHS band and choir in their own song, “Gypsy Wisdom.” Middlebrook is giving a portion of the proceeds to support the band and music program at KWHS.

"This is the spirit of the MEETING OF THE MINDS event!! Parrot Heads and OUR musicians ROCK. See you on Wednesday at the Casa Marina!!" ~~ Andrew Talbert, MOTM, PHiP 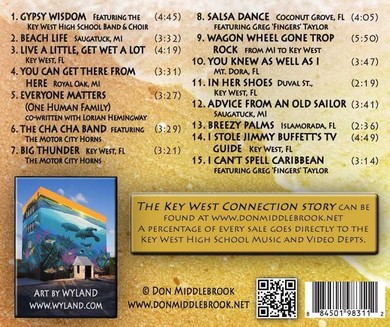 For all those that have been to Key West, you know there’s no party place like Duval Street.  Here are the lyrics to my new song, ‘In Her Shoes,’ that can be found on ‘The Key West Connection’ CD.  Inspired by the Duval Crawl.

Black ones, brown ones, yellow ones, greens;

Open toes don’t you know in purple, red, and cream.

Array of colors in high heels and flats;

I love the way she moves when she walks in her shoes.

Yes, I love the way she moves when she walks in her shoes.

Saw her the other night just in flip-flops, and she was smokin’ hot! 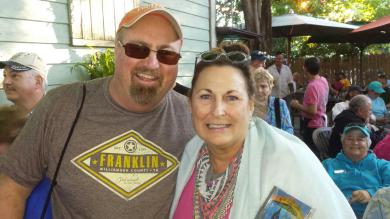 While in Key West I had the good fortune of meeting Lucy Buffett, Jimmy Buffett's sister. She'll be taking "The Key West Connection" back to her restaurant, LuLu's at Homeport, in Gulf Shores, AL.

The Making of the Key West Connection

Twenty years of playing music in Key West has brought me many great memories and friends.  It’s a long trek from Michigan, but always worth the drive.  Let’s face it; if Key West were on the moon, I’d become an astronaut.  One of my dearest friendships has been fostered throughout the years with the late Captain Tony Tarracino, and more recently with his family.

After his passing, Captain Tony’s family and friends established The Captain Tony Days Life Scholarship (www.captaintonydays.com), which raises funds to benefit Key West High School students.  I’ve been honored to be a part of this wonderful effort.  Last November, faculty member, Ed Smith, offered me the use of the high school recording studio as a token of his appreciation.

Later that night, I found myself down at the Rum Barrel in Key West listening to a band called Gypsy Wisdom.  The female singer rocked, and passion moved the crowd.  It was great to watch her loving her craft on one of the great stages of the world -- Key West.  Gypsy Wisdom was creating a perfect tropical blend, and I knew a new song was brewing of my own.

The next day I grabbed a beer for the “road” and strolled down the street -- a luxury we tourists enjoy and savor in Key West.  A group of backpack-laden high school students walked by.  I high-fived them as they passed me . . . and my beer.  I laughed.  I’m sure I was just a common sight for them in Key West.

I called Ed Smith the following day and told him that I wanted to perform a song with the Key West High School Band and Choir to help raise money for the school.  We would record together via the Internet and create a perfect tropical blend.

That following March, I met with the faculty and presented my lyrics and song.  They appointed Natalie Madruga as the student to lead the project, and we were off and running.  A town of strangers -- becoming friends.

Soon my “Key West Think Tank” was working.  Coral Tarracino, Captain Tony’s daughter, called me and said one of her friends had really liked my songs and wanted to collaborate on a tune.

“You’ll like her, she’s got Michigan roots,” Coral said, “and she would love helping the kids!”

When the phone rang it was Lorian Hemingway, Ernest Hemingway’s granddaughter.  I was beyond shocked.  We talked about Michigan, Key West, Coral (sorry Coral) and lyrics.  Our objective was to further people’s awareness of the “One Human Family” theme of Key West.  Soon I knew a musical bridge between Michigan and Key West was being built.

It took a drive down to Sarasota, FL to chase down my buddy, Wyland, and ask him to do the album cover.  He is a world-renowned marine-life artist (www.wyland.com).  Beyond his amazing artwork and credentials, Wyland is a wonderful man, who happens to also be from Michigan.  He and I have always loved to share stories.  He never fails to end each encounter with “Go Blue,” (University of Michigan), which I have to counter with “Go Green and White” (Michigan State University).

Now The Key West Connection was taking form.  I worked on some new tunes, brought back some old ones, sprinkled in some recordings of “Fingers” Taylor, brought in Bob Seger’s horn section, and Verve Pipe drummer, Donny Brown.  I dropped in the great Chris Corey, Angela Fata, and Hank Mowery, from my band, and a perfect tropical blend was born.

I caught a little ‘Gypsy Wisdom’

Down in Key West,

A band of vision, to be the best.

She sang with her heart,

It was a hell of a show.

We were drawn in,

Held hostage by the rum.

And she sang with her heart,

With style and grace,

And then she would just let it go.

We came as strangers and left as friends.

It was a perfect tropical blend.

It was Caribbean jazz,

with a Latin splash;

A tango slide with a thunderous crash.

And, man, that girl could sing!

We are the children of Key West;

And our mission is to be the best.

And we sing with our hearts,

We sing with passion,

We don’t sing about rum;

No, we’re way too young.

But we sing with our hearts,

With style and grace; Conchs, let it go!

We are the perfect,

Don Middlebrook is considered by many to be one of the founding fathers of Trop Rock music.  For more than twenty-five years, he has blazed a trail of over 150 tour dates per year all across the United States.  Middlebrook has more than 15 albums to his credit, along with a four-year extensive tour with Greg ‘Fingers’ Taylor, Jimmy Buffett’s harmonica player of twenty-six years.  Don's work has been featured in Showtime movies and on the Discovery channel, and he has warmed up the crowd for many nationally acclaimed artists, such as Reba McEntire, The Doobie Brothers, Hall and Oats, Jefferson Starship, Meatloaf, and Lynyrd Skynyrd.  www.donmiddlebrook.net 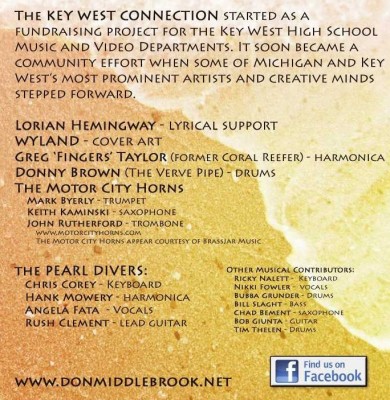