Returns to Key West to Toast “The Captain”

Friends and family of Tarracino, Key West mayor and colorful character who brought international attention to the island, have been invited to share “a Toast to Captain Tony” with stories as well as song starting at 6 p.m. Thursday, Nov. 1.

Long-time owner of the saloon with his name, charter boat owner, pioneering Keys fisherman, gambler and rugged, colorful character treasured by island visitors who love to return, Tarracino was rooted in Key West from the time he found his “utopia” in the 1940s.

“With all the Parrotheads in town, this is a perfect time to toast the legend and learn more about this annual event, too,” said Middlebrook of another time when they can mix with other locals and visitors at Captain Tony Days 2013, Aug. 1-2-3.

Anthony “Capt. Tony” Tarracino was an early and long-time friend and supporter of Jimmy Buffett. Years later, that famous songwriter-singer-guitarist wrote “Last Mango in Paris” as a tribute to his old friend Tony.

Don Middlebrook is based in Michigan, but the siren call of the tropics has drawn him to Key West for more than 20 years, and he’s a member of the Key West Parrothead Club.

His “Goodbye to Captain Tony,” written after Tarracino died in 2008 at the age of 92, is from “Beach Bar Serenade,” a CD well known by Parrotheads and Trop Rockers.

His story-telling song “Goodbye to Captain Tony” is now also featured at the web-site www.CaptainTony.com.

Middlebrook recalls it was in the 1990s when “Captain Tony called me and said he was coming to Detroit for a Jimmy Buffett show; he asked me if I would join him. I was flattered and reminded that this legend was a legend because he was so real.”

Middlebrook also has just released three new songs, one of which, “Big Thunder,” is a tribute to the racers of Big Thunder who were lost at the 2011 powerboat races off Key West.

nother, “Advice from an Old Sailor,” is slated to be picked up by the Discovery Channel for a 2013 documentary, Middlebrook said recently.

“Key West is a magnet for musicians like me,” he said. “I’ve always liked the character of the island and the people who live on the island. One of my favorites was Captain Tony.

“Captain Tony had the wonderful ability to make visitors feel like neighbors.”

Middlebrook’s new songs, also including “Beach Life,” are available free for a limited time starting Oct. 18 at his web-sitewww.donmiddlebrook.net.

Reflecting a connection he has treasured over the years, Middlebrook said “I was honored when he penned these words for the insert of my “Traveling Music” CD: “…I swear when I close my eyes, Don Middlebrook sounds just like Jimmy Buffett during the Love Kids years in my bar. It’s no wonder that Greg “Fingers” Taylor has found himself a new sidekick, at least for now. A great songwriter meets a great harmonica player, sounds like the beginning of another great story…” 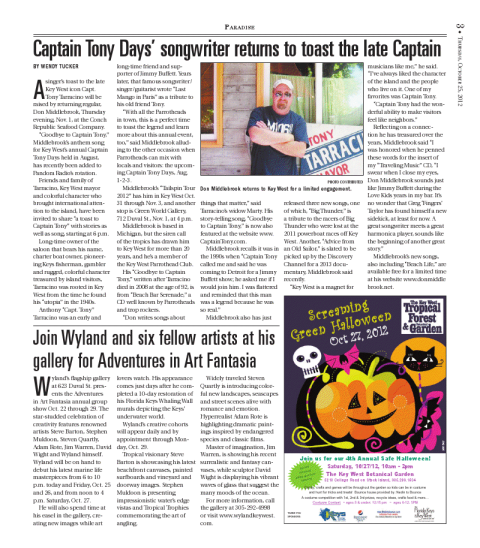